Back to Moloka’i… yes, we left.

It’s been much too long since I wrote a blog, but life suddenly became a blur starting on the 17th of February, not that anyone missed it, but my Mum. 😀

I apologize for the length, I’ll try to keep it short… 🙂

On the 18th Mike got held back at work, but I got to attend Mr. & Mrs. Kuapahi’s (Miwa & Steve) wedding at Dixie Maru on the west end of Moloka’i. One of the most picturesque spots on the island.
Miwa & I went to UH Maui College together. It was an honor to share in their special day with them at one of the most beautiful spots on earth. Of all the places to get married, just down the road from where we’re living! 😀

Later that evening Mike got off work and we went with our new friends from Victoria, Canada (Dawn & Robin) to a concert at Hotel Moloka’i with Lono & Cyril Pahinui, admission was free! 🙂  Pretty nice way to spend the day.

The next day started off early on the 19th after taking M to work and then picking up Mum and Dad Nawatzki who flew in from Maui! We were going to spend the next 3 days together. Boy did they end up going quickly.

After picking them up, we went for a big loop around the airport back to where we started out… planned scenic detour of course (hehe never drove around that area before :P) and headed up to Kualapu’u and Kalae.

We went to the Kalaupapa Lookout, hiked a little bit into the forest and viewed the town. We ended up coming back to Kualapu’u for breakfast two days later, SO worth getting up early!!!!

After showing Mum and Dad my favorite lil’ general store where I like to get musubi’s, Pringles & Melona bars; we headed briefly through Kaunakakai town and ate breakfast at Molokai Drive-Inn. Then we headed towards the east end of the island, Puko’o side. We went nearly to the end of the road, but after quite a few cliffs we decided to turn around and head back towards town.

We made a quick grocery/gas stop back in Kaunakakai town where my Daddy got us yummy food and his dear old, memory lane “Wheaties.” 😀 After that it was time to head ‘home’ to the other side of the island, Paniolo Hale!

After giving the “grand” tour which took all of 2 and a half minutes, parents got settled and we headed out for a property/beach walk. After that we played paddle tennis ball (which turned out to be REALLY fun!), took another sunset stroll and then made pasta for dinner with hot cocoa and cookies for dessert. Whew! A filled, fun & tiring day.

The next day I went to pick up Mike from the station and then we made breakfast, ate outside on the lovely screened in lanai, made a picnic lunch, got our gear together and headed out towards Maunaloa. We went through the town, noticing all of the enticing real estate and took the dirt road down to Hale O Lono to fish! After enjoying a couple of hours catching nothing and eating a picnic lunch- ironic that we had tuna sandwiches….we went to explore the beaches and show Mum and Dad a lil’ more of our new “home.”

Dixie Maru was the first stop and then the GREAT Papohaku Beach. It was so inviting that we decided to not just gaze at the vast beach in amazement, but to set up some chairs, eat some more, and play in the surf! We had the entire beach to ourselves- it’s becoming the norm. 🙂 Spending a couple of special hours playing like children without a care in the world we got back on the road.
Dad and his hobby of looking at ‘houses not to buy’ wanted to stop at an open. 😀 We got to explore the condominiums next door and see the “coveted” only resort hot tub on island. 😀

Breakfast at the cookhouse after taking M to work, gas and grocery stop (go through gas SO quickly over here at $5.16/gallon :-S) and then quick drive through Maunaloa again. We decided to kind of take it easy that day and played some more paddle tennis ball (Mum even played too!), lounging at the pool, Dad went for a bike ride, we played a bit in the ocean at “Maké Horse”, showered, had a bite to eat and then headed out to the airport…this time I knew where it was!

At least this goodbye would be “see ya tomorrow at the Lahaina docks!” Mike surprised me with a birthday present trip back to MAUI!!!!! 😀 Back to Kianapauka (my kitty) and Costco!…I mean family. 😀

The next morning Mike and I went to the station (actually, I met him there) and we attended the blessing of a NEW truck going online! Engine 4 (Kaunakakai) is the only station that has a truck with the hand-painted Hawaiian flag on the grills, it was generously donated, so no cost to the county! 🙂

From there, Mike and I were going to head back home to pack and come back to catch the ferry….suddenly, Mike noticed an unfamiliar sound and pulled over…the right shock was completely loose, dangling from the top! :-S We quickly pulled into Napa Auto parts and asked about bolts…well, Mike did that part. Thankfully, we met a nice young man named Donavon who offered to help us out and actually put the bolt on with his tools! We took off the tire (I helped with the lug nuts ;-D) and the countdown to setting sail was on!

Once back to our lil’ place on the west end, we showered, packed up and got back on the one road! 😀 Off to the docks to catch the ferry!
We got on the ferry with just a couple of duffel bags, cooler bag (for the Costco run) and a backpack. We made it to Maui….but it was the LONGEST two hours I’ve experienced in a long time….haven’t felt that sick in a while….happily we were greeting by Mum, Dad, Gabes, Justin, Melissa and Mr. Vandierman. Off to see and join the Halau ohana (Malani O Kapehe) and dance at the Whaler’s Village!
Wow, since this is SO long, I’ll leave the rest of the weekend for the next entry. 🙂
All in all, wonderful trip back to Maui, sad to go, yet happy to be on Moloka’i.
Aloha & a hui hou,
ilima 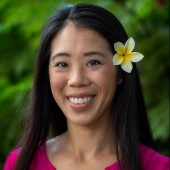 Aloha, I'm Caroline. I'm a simple Maui girl, wife to the greatest man I know and mama to the most amazing, cute and caring toddler on the planet. This is my journey.

Waking up on Moloka’i

My eyes are about to pop out!

Starting All Over Again…

Aloha! Looks like you've stumbled upon my online journal. Feel free to look around and if you have any questions, please reach out!Contact me